dweller by the river

sojourner of earth attempting to understand the journey home 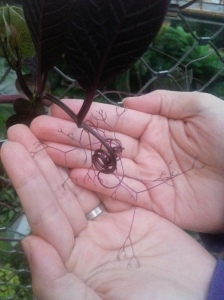 This isn’t a homage to the blog Transpositions, even though it is a very good resource. It does draw on the blog’s use of the word, though.

I should have seen the signs, really. The world turns, and the seasons change, and my entry into the world of tillandsias marked a new season for myself – one that I really should have been more alert for.

About a month ago I accepted an invitation to a teatime meet with a fellow hula dancer. We’d been acquainted for a long time – a few years, in fact – but had never really had cause to pursue further relations. Somehow, in the course of my ramblings that afternoon, she told me that it was clear to her, at least, that I had passed from my Shieldbearer phase into the Life Speaker phase. I thought about it for a while, but didn’t pay much attention because most of the other aspects of my life hadn’t seemed to indicate any such thing.

It’s been especially true in the past few months: Crossed communication lines with important people were getting more and more tangled. Fatigue and weariness were beginning to gain ground on dogged hope, slowly morphing the edges into cold, brittle despair and apathy. And I lost a few plants, and looked set to lose a few more.

It occurs to me now that I’d forgotten the most important thing about these phases. One never goes into them prepared and ready to play the role. One enters with fear and trembling, knowing that hard lessons are about to be learnt. The phase is not so much about executing the role as about being equipped to do so. It’s not an elevation or a promotion, as such. It’s a transposition, a time of realignment, breaking, growing, and filling.

If you’re someone’s shieldbearer in battle, you’ve technically done your job – the bare minimum – as long as your charge suffers no harm; but you’ve not really fulfilled the call if your positions are stagnant (worse if you’ve lost ground) or if your attackers live to attack again. And you haven’t owned the position if your charge is emotionally/psychologically/spiritually hampered either. If you own your position, he’ll be advancing in the knowledge that you are there.

I’ve become hard and brittle. That’s not strength. In all the struggle to survive, I’ve forgotten how to live. And that’s the real revelation about the Life Speaker phase, isn’t it? It’s not this ideal place from which I am now qualified to dispense wisdom and edification, although that will surely be a by-product to some extent. It’s about learning to live again – speaking life to the death within myself.

The past two weeks have been the hardest of the last 52 in some ways, and also the most joyous in other ways. I’ve been working through some issues, and I’ve also had the delightful honour of spending time with S (that hula sister); in answering her questions, with my focus on her needs instead of my own, I’ve walked the old paths by muscle memory and somehow found myself back in that place I thought I’d lost. The lamps are being relit and I can feel that old familiar passion building. It’s bubbling up, effervescent.

I tell you the truth – the principle of sowing and reaping is first and primarily meant for the na’au, the spirit man . Everything else is secondary, inferior, laughable in comparison.

And I know now, if just in a tiny little way, the holy fear that Jesus instilled when He cautioned against flippantly considering oneself a leader or disciple (Matthew 23:10, 12). I haven’t studied that section of scripture enough to know exactly what He was talking about, but I’ve read those verses before and felt like I should be afraid, but didn’t know why… and I’ve watched so many big-time church leaders seem to enjoy their positions, and wondered why I felt like it was somehow irreverent.

I know it because in some small way, by looking to me to help her see her path a little more clearly, S has put herself under my spiritual authority. And it’s scary. It’s terrifying. It is an awesome and holy privilege and also something that makes me want to run screaming. I don’t want to be responsible for teaching her the wrong thing. I don’t want any mistake in interpretation on my end to wind up being a wrong conviction on her part. I don’t want to have to stand before the Father give an account of how I led her astray, inadvertently or not.

But you know… one can’t escape the call forever. And as much as E has a prophetic call and a healing gift, I’m meant to teach. God, keep me focused and keep me real!