dweller by the river

sojourner of earth attempting to understand the journey home

This pretty little plant is a NoID—it’s the first tillandsia I ever bought, and the seller didn’t seem to have any idea what it was. He just kept telling me, “Miss, it’s an air plant.” Being new to air plants at the time, I didn’t think to pursue it further, and only after I’d gone home and done a search online did I realise that I had no idea what my new pet really was.

Since then I’ve seen this tiny bit of green grow new layers of leaves and enlarge its circumference rather significantly. I’ve asked some tillandsia experts what they think he is and they’re not sure—he’s still very small and they can’t really tell until adult size and shape is achieved and he flowers. Till then, we think he’s either some sort of ionantha or capitata, or a variant or hybrid of either.

The little guy hasn’t always looked like this. Six months ago when I first brought this plant home in its mini clay pot, and from there to the office, it looked like this: 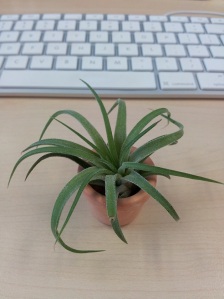 For the first few weeks I really thought I would end up killing him by accident. He was so tiny, and seemed so fragile, and from my research I realised that he was only a pup (of whatever species), and possibly a little on the small side to have been separated from the mother plant and sold. But over the months he flourished, and has been growing roots profusely (I’ve trimmed them off twice now)… and as my confidence in handling and caring for him grew, so did my confidence in keeping tillandsias in general. In short, it’s because this plant has been a success that I now own 50 plants.

What has he taught me so far? To never despise the little things, and small beginnings, and to speak life over the living things in my charge. Realising that we are “the planting of the Lord” (Isaiah 61:3) also made me think about how, from the plant perspective, we are dependent on our Gardener. And because His care is faultless, all we need to do is enjoy the sunlight (love), water (His Word) and wind (the presence and touch of the Spirit) He provides in order to flourish, set down roots, and grow. And ultimately, flower and produce fruit (seeds and/or pups in the case of tillandsias).

It’s a beautiful reminder of our relationship with the Lord every time I look at my little beauties. 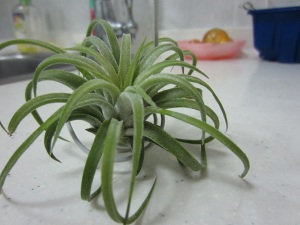